Many readers ask about different aspects of the book—characters, themes throughout the story, details and situations, and other stories behind the story. Below are a few of the author’s responses that hopefully provide suitable answers. (Visit the site often, as this section will continue to be updated as more questions are asked.)

Q: Is the main character, Rol, named after anyone specific?

A: Good question. The answer is yes…and no. And actually, there are two answers:

1. Growing up, I had an Uncle Rol. The book is not about him specifically, as in a biography, but he was an adventurous soul, and inspired me as a child when I heard tales about his younger days, and even when he was not so young. I remember him being friendly and outgoing, active and dynamic, and oftentimes making someone laugh or on the verge of pulling a (goodhearted) prank. Those traits are in the main character Rol, and they also show up in other characters in the story.

2. One of my favorite high school reads was The Song of Roland. It is an epic tale of bravery, challenges to overcome, more bravery, and even more challenges. I highly recommend that book and also encourage you to read the introduction (if your copy of the book provides one) to give background to the story. You will get so much more from The Song of Roland by understanding the setting and a few details about the major characters.

Q: What about some of the other characters?

A: I’m glad you asked. A few short answers (more details later): A. Loysius DaTerrin is named after Saint Aloysius Gonzaga, the 16th century patron saint of the youth. (Good name for a wise uncle, right?) Anthon (full name – Anthonononsense the Adventure-Seeker) is named after Saint Anthony of Padua, the 12th-13th century patron saint of lost things or people, as well as those going on a journey. Mayor Maggie, leader of Smelton, is named after Mary Magdalene, who lived in Jesus’ time and is patroness of—among other things—perfume makers (which is quite fitting, given her environment). Kearth is another story…meant for another time.

A: Didn’t I say that story is meant for another time? You’ll have to wait.

Q: Why did you put blank pages in the book?

A: I thought it would be fun to unexpectedly end a

Q: On the map at the beginning of the book, there is a location called Wellsville. What’s that all about?

A: Wellsville is a town in western New York where I spent a great deal of time in my younger years, even though I never actually lived there. It was a family meeting destination for as long as I can remember, and those memories are cherished. My parents both grew up there, and grandparents, aunts, uncles, cousins, second cousins, and more either lived in that town or close by, and gathered there often. It seemed fitting for it to make an appearance in my book, although I didn’t want to draw too much attention to the town and have it overrun by swarms of curious readers. It could happen.

Tisbetterhere and Betterthanthem? Not real places. Not yet, at least. As far as I know.

Q: Is a larch bird actually a bird?

A: Yes…well…close enough to get you a point in Scattergories if you are convincing. 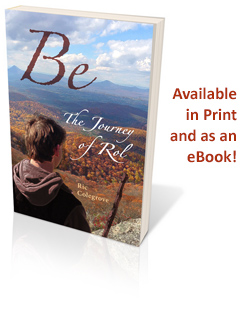